“EL is quite behaved” – Day 1 of national lockdown 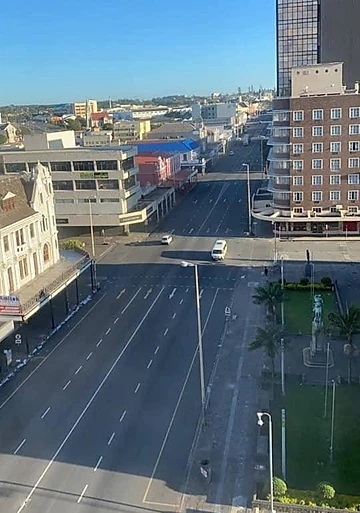 Police visibility is not yet as expected and the military has been missing in action by midday on Friday in East London, but 14 hours into the national lockdown, there is calm in most suburbs with East Londoners respecting the “stay at home” directive.

Marcell Van Der-Westhuizen, security personnel for Hartwig & Henderson visited the Eastern Cape Rising Sun this morning during a routine check-up and shares his first six hours (6am to noon) of the lockdown.

“It has been uneventful with just one business alarm reported. People are out on the streets, some going to work, I hope they have permits,” said Westhuizen who was more concerned about grocery stores and supermarkets failing to maintain distance between shoppers. “There are lots of people at shops with no application of distance precautions. Shops should enforce these rules. People should not stand on top of each other and keep distance,” he advised.

Eastern Cape Rising Sun did a few patrols this morning in suburbs and noticed “calm” in areas like Nahoon, Stirling, and Berea while feedback from residents was that Amalinda and Southernwood is still very busy, while residents are “well behaved” in Beacon Bay, Stirling and Westbank areas leading to the airport.

In other reports, hundreds of commuters in Scenery Park were left stranded as there were no taxis to take them to work. A quick reminder to commuters, taxis operate from 5am to 9am and 4pm to 8pm.

Van Der Westhuizen, whose wife also works in a company that falls under Essential Services concluded that parents who are faced with a similar situation must find activities and edu-tainment to keep their children engaged at home.

Eastern Cape Rising Sun visited Vincent Park Mall where a few essential shops are open with a small group of customers walking the passages. Security guards appeared to be more relaxed with less to do. Meanwhile, car guards complained that there was no work because there are no cars to guard. The usual influx of small taxis on Devereaux Street is now replaced with a handful of sedans.