Home News Local News No to Looting in our City!
NewsLocal News 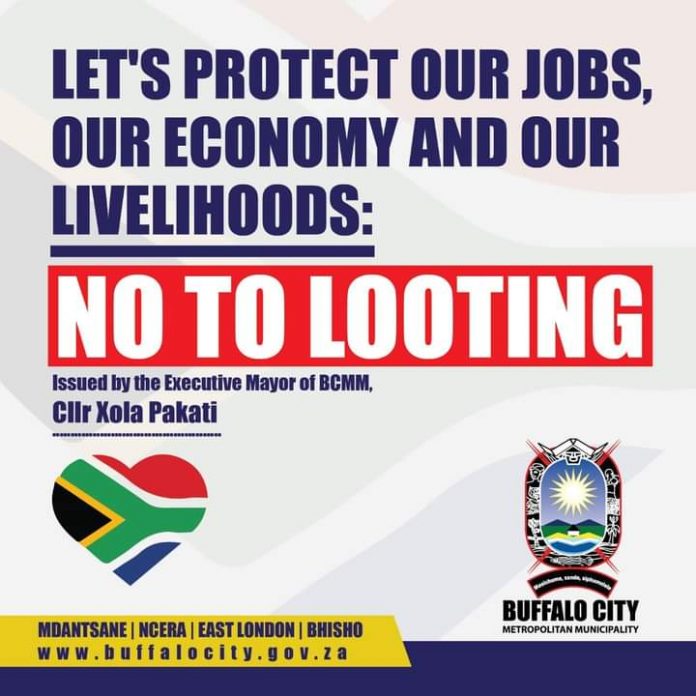 Fellow Residents of Buffalo City
I speak to you during a tense mood in our country where there is continued looting and destruction of property in certain parts of the Republic. The visuals we have been seeing are very devastating because we know that they will end with increased poverty and destitution for the majority of South Africans.

The actions that we have been seeing are extremely shocking, criminal, and barbaric. They are not only counter-productive, but they are also actively working to undo the gains of our democracy and they are a frontal attack on the conditions of the poor and the working class.

We are issuing this message to highlight the fact that acts of violence, destruction of property and looting have no place in our city, and we will work very hard to ensure that our economy is well protected.
From the night of the 12th of July, we have activated our multi-stakeholder law enforcement team working with the South African Police Services and we are actively working to protect all points that may be targets of criminal elements that are responsible for the looting. Already there is enhanced police and law enforcement visibility in many areas of our City to manage any outbreak of looting and violence. We have decided not to take chances, its best we err on the side of caution.

We want to plead with residents of our metro to play their part by refusing to participate in acts of destruction of property and looting. Residents should also play their part by actively reporting any suspicious activities to the police and other law enforcement agencies. The people who plan these acts of destruction stay in our communities and we would have failed as communities if they eventually commit such acts without us first identifying them and then tipping off the police so that they are stopped.

We have already met with the business community in our city and taxi associations in our city and they have pledged their support towards assisting the police in the identification of suspicious activities within time. We are noting that many businesses in our city have decided to take pre-cautionary measures of closing their operations and we are hoping that the joint law enforcement efforts we are making will eventually assure these businesses of the safety of their operations. We are encouraged by the message issued by the Premier of the Province which asks all of us to desist from looting and destruction.

We are also happy that the Kingdom of AmaRharhabe has issued a message calling for peace and calm. We have asked that our councillors and ward committee monitor communities in order to prevent any outbreak of looting and destruction of property.

We must commend the residents of our Metro for not participating in the acts of looting despite the sinister mobilisation that was happening on social media. It is very encouraging that our residents are choosing to protect our economy, our jobs, and our livelihoods.

Peace loving and law-abiding citizens of the Eastern Cape, we have seen messages of a campaign trying to mobilize you to do what is...
Read more