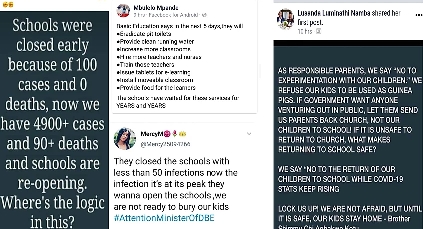 A thousand schools in the Eastern Cape have no access to clean water and proper sanitation for hand washing and hygiene, yet the government plans to open schools under level 4 of the lockdown on May 6.

The decision to send principals to school early so they can assess the readiness of schools has been labelled as ridiculous. However, the government has assured that adequate water and sanitation will be available to all schools, a service that has eluded them for 26 years.

The Department of Water and Sanitation, under their emergency water supply programme for schools is expected to install water tanks to 3 475 schools across the country. Children are expected to wear masks the whole day, with no hugging or touching and they must be two metres apart inside the classroom and at all times.

All children and educators will be screened for temperature and symptoms at the beginning of each school day. They will also be orientated and trained on how to prevent the spread of Covid 19.

A national address by Basic Education Minister Angie Motshekga, scheduled for Thursday morning has been moved to 4:30pm after it was cancelled on Monday. On Wednesday alone, ten people died from Covid 19 as national deaths reached 100 and cases peaked 5 000.

The province is at 630 cases, with 11 deaths and 46 recoveries. Meanwhile, Mathanzima Mweli, Director General for Education announced that government plans to open schools under level 4 of the lockdown. 33 000 parents and teachers, mostly from the Eastern Cape are petitioning on Facebook to challenge this ‘premature and dangerous’ decision through the Constitution. The petition and page is called ‘No school for our kids’ to prevent Grade 7 and Grade 12s from going back to the classrooms soon.

“I will not allow my children to go to school and come back in a body bag. I would rather they repeat the academic year in 2021,” said a mother of four. The Eastern Cape has just over a million learners, sixty thousand teachers in 5 205 schools.

The angry teachers claim that no matter how you distance people, or send half the children to school, these are still large numbers that are safer at home. A Grade 7 learner, Zizipho Soci (13) said she misses school and is worried about the curriculum but prefers to stay at home and wait until the number of infections has dropped.

“It is safer for me and my school mates. If they force us, they would be risking our lives,” said Soci. The Congress of South African Students (Cosas) has also rejected this ‘premature decision’ claiming that government will not be able to supply Personal Protective Equipment for all schools by next week.

“They are still struggling with supplying PPE to prisons and hospitals. They are struggling to contain the virus everywhere else, it will be the same for schools,” said Katleho Mangoejane for Cosas.

Other grades are expected to resume at different stages from May 20 until the end of July. Some parents, however, agree that it is time to go back to school. Bulelwa Giya, a parent lamented that children are always playing on the streets during the lockdown, sometimes far from home; therefore they might as well go to school.

“Good I am happy that Grade 7s and 12s will get a chance to recover the year as they start new schools next year. They will be spread out in class because there is a space. People will always complain,” said Phyllis Mabu, a parent and teacher.

Those against the decision claim that Minister Motshekga is making a mountain out of a hill as the first term can afford to be lost in a crisis and recovered using the two remaining holidays, coupled with extra classes.