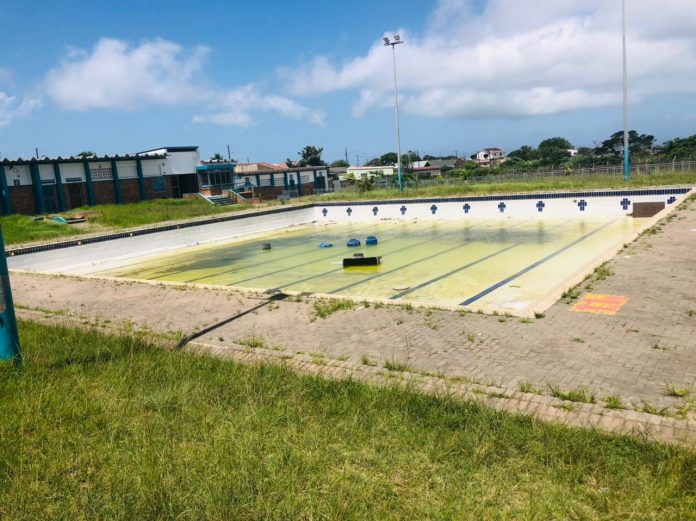 The Ruth Belonsky swimming pool in Parkside which is currently closed due to the lockdown regulations, has fallen prey to vandalizers who are also using the vacant spot for drug peddling. It is believed that during the pool closure, the gate chains have been cut off, bob wires are used to lock the premises and some sections of the walls have fallen onto its side.

Residents in the community has cited that the Ruth Belonsky pool has become a hangout place for thugs in the community. Apparently, people are entering through the broken and vandalized walls to access and use the premises for their gatherings.

The Eastern Cape Rising Sun (ECRS) during their visit found that even though there was no water in the pools, there were trash and broken glasses lying around. Two under-aged boys who are believed to be between the ages of 14-17 years old were seen smoking marijuana on the premises.

Community member, Justin Jooste believes that the problem with the swimming pool being in such a terrible state is because of the low maintenance by the Buffalo City Municipality (BCM). “The lack of security at the pool is also one of the reasons why our very own community members including adults and kids have access to the pool after hours, when vandalism takes place,” said Jooste

Jooste added that as a result of the pools not having safe and secure walls to keep people out, groups of teenagers gather and engage in mischievous behavior such as alcohol and drug abuse, thus destroying what’s left of the property. Jooste urges that drastic measures be implemented for the year 2021. “We cannot disregard the fact that we are blessed with a swimming pool in an impoverished community. This is an asset to our community,” stated Jooste.

BCM confirmed that they are aware of the vandalism that is taking place at the Ruth Belonsky pools and are in the process of strengthening security visibility.

“Currently, there is security for both the morning and evening shifts. Our Law Enforcement officials, together with South African Police Services, are also conducting patrols. It is believed that one individual was arrested, and a case has been opened with SAPS,” confirmed Luxole Komani, BCM Communications Officer.

In beefing up security at the facility, BCM states that it is waiting for the procurement processes to take its cause to replace the fence as well as add more security personnel.

BCM urges the community of Parkside to assist in coming forward should they see anyone on the premises so that they can apprehend the culprits who are vandalizing the facility.

Awakened by the high unemployment rate and mental issues amongst the youth of South Africa is Ntombozuko Balintulo a 24-year-old from Cala, in the...
Read more
Local News

BCM Water: Amongst the best quality, many disagree

Samples of the latest water quality test were released by Buffalo City Metro Municipality in an attempt to encourage residents to have confidence and...
Read more
Local News

By Rising Sun Reporter The family home in Greenfields that was gutted recently, leaving dogs burnt alive and the family narrowly escaping with their lives,...
Read more