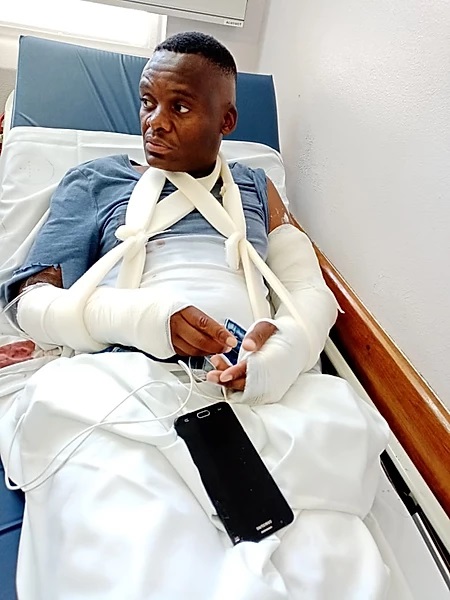 A shopper was allegedly stabbed and beaten with a steel pipe by a Southernwood store owner after he tried to get a refund for an expired packet of biscuits he bought for his 10-year-old daughter.

Thabo Moji was accompanied by his daughter to Royco Spaza Shop, when he made his purchase, only to realise later that they were expired while his daughter opened the packet.

Upon investigation by other residents, products including juices that expired last year were still on the shelves being sold.

“The Covid-19 situation is getting to people, but what the store owner did is wrong and he must be fined for cheating shoppers and punished for attacking the customer,” expressed a local in the area.

The confrontation began when Moji went back to the shop to request a refund but was confronted by an equally annoyed store owner who refused.

After a long argument and just before leaving the shop, Moji cautioned two children entering the shop advising them not to make any purchases because of what he just experienced.

It is believed at this point, the store owner picked up a steel pipe attacking Moji who sustained fractures on both his arms and was stabbed in the chest. Covered with blood, Moji battled to walk and sat on the doorstep, where neighbours came to his aid.

The store owner was arrested by police, but after a few days, he was back at his shop. A case was opened at the East London Police Station.

Fuming residents marched to the store a few days back demanding it is closed until health inspectors visit the shop.

“A list of expired goods was found in the presence of the police. The store owner is a foreigner, but this was not a Xenophobic attack, there was no looting, we want him to pay for what he did,” lashed out another resident.

When Eastern Cape Rising Sun visited the shop on Saturday (March 27), it was still open. At the time of going to press, police were not reachable to comment further on this case.