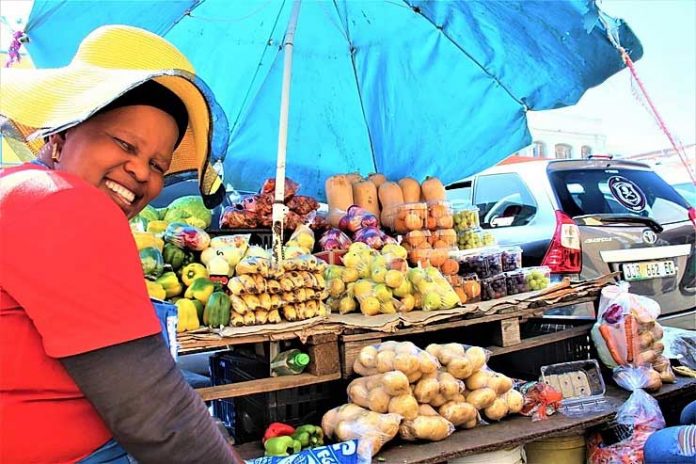 The worldwide Covid-19 pandemic has brought fears of food security as over 100 countries have had their economic activities halted or slowed down. According to the Women in Informal Employment: Globalising and Organising; street vendors are an integral part of urban economies as they offer easy access to a wide range of goods and services in public spaces at affordable prices.

One of the most popular products sold on the streets of Buffalo City is fresh vegetables and fruit. The inequalities between those at the base of the economic pyramid and those at the tip are evident in the City. People’s first choice is always the big supermarkets.

Buffalo City is thriving with a plethora of mostly female street vendors working close to 12-hour shifts selling fresh food to feed their families as bread winners. With food security threatened, it may be time to invest in these brave business people.

Sindiswa Ngcobondwana (50) has been selling fresh fruit and vegetables for over 30 years, since she was a high school scholar. The mother of four has literally raised a family as a single mother and breadwinner from her street trade.

“My older sister was a street vendor and I grew up helping her in our village Tsholomnqa. After I finished school, I could not get employment so I decided to do what I know best,” says the likeable mother.

She set-up her first stand at the Tsholomnqa taxi Rank in her 20s, then she moved downtown and in 2017 she moved closer to Oxford street. On a good day, mostly around the month end, Ngcobondwana makes at least R500 per day. However, on a regular day she can make as little as R100 or less.

She is one of 12 women outside the Shoprite store in the central business district who sell more or less the same product, meaning competition is very tight with a small client base. She stocks at the local Wilsonia market twice a week, on Mondays and Fridays so her produce is always fresh.

She hires a local bakkie to transport her produce every day from her Reeston home. Her first born daughter, now in her 20s, often helps her in the stall when she is not attending lectures at the Walter Sisulu University.

“She is a student at University and that was made possible by this business and NFSAS. All my four children are in school. I am grateful that every single day I go home with a loaf of bread, butter and orange juice. I do not borrow money from anyone for taxi fare for myself and my children to go to school,” she enthused.

Ngcobondwana has invested in a home garden where she grows pepper, spinach and turnips to add to the produce she sells.