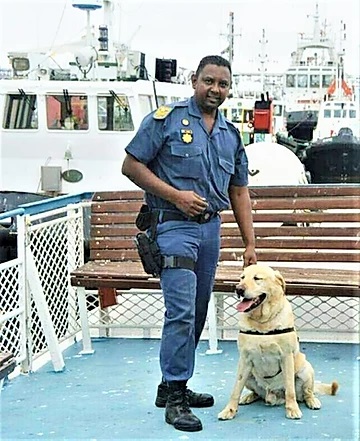 The Humansdorp Cluster bid farewell to one of its top achievers at the K9 Unit, Warrant Officer Donovan Naidoo who is leaving the Eastern Cape to join the Soshanguve K9 Unit in Gauteng. In a double blow for the unit, Naidoo’s dog, ten-year-old Labrador, Hilmer, will also be retiring.

The pair have criss-crossed the province and participated in dangerous provincial operations targeting crimes. Naidoo was honoured with the National Commissioner’s Special Award at the 2019 National Excellence Awards for the exceptional work that led to the arrest of suspects and the seizure of dried abalone valued over R6 million.

Hilmer on the other hand, was trained in tracing of protected species such as abalone, rhino horns, crayfish and ivory. The dog is currently being relieved and is to retire after an excellent service in the South African Police Service.

Naidoo who worked in the Western Cape as a sergeant was promoted to Warrant Officer in 2019 and joined the Humansdorp K9. Humansdorp Cluster Commander, Brigadier John Lebok was full of praise for the member.

“Naidoo spent just over a year in this cluster, but his work attracted the attention of the provincial senior management, as he was always partaking in provincial special operations. The province, and more especially our cluster, has lost a member with special qualities. We also say bravo to Hilmer for an excellent service, and it is time for our four-legged member to go and rest, “added Lebok.

Buffalo City Municipality has urged customers to use revenue services closer to them, concerning the billing inquiries, which have caused long queues outside BCM...
Read more