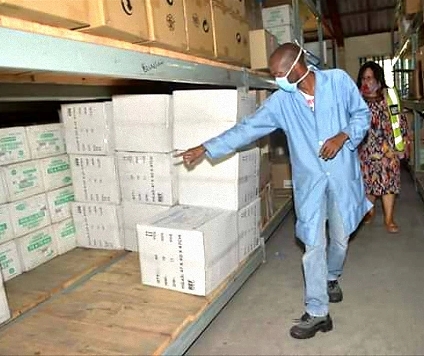 A storeroom full of Personal Protective Equipment (PPE) was uncovered at the Frere Hospital in East London following a spate of protests by health employees over lack of equipment.

During a visit on Wednesday, the Department of Health officials were stunned to discover that the hospital has sufficient equipment to tackle the deadly Covid 19.

Surgical gowns, gloves, litres of sanitisers, helmets, goggles and other equipment designed to protect the health employees from infection were discovered in boxes going up the wall.

“We wish to appeal to our health workers to save lives as they are the last line of defence. We appreciate your commitment and dedication shown in ensuring that the province achieves close to 50% recoveries,” said a stunned Sizwe Kupelo, Department spokesperson.

A handful of healthcare workers in the province have brought forward claims that keeping stock locked up in the storeroom instead of distributing it for the use of medical staff and patients is an old age tradition in the Eastern Cape.

One nurse claims that the only way they get their equipment in their ward is because his manager is bold enough to raid the storeroom.

“Patients can freeze in winter while hospital management keeps thousands of gowns in the storeroom. They distribute them when a government official from Bhisho is visiting and when they are gone; the clothes are returned to the storeroom,” he claims in a social media comment.

Others came forward claiming that the stock can even expire and grow fungi as management risks their lives using old and minimum equipment to save lives.

Frere Hospital workers had downed tools on Tuesday over a lack of PPE and accusations that the hospital hides positive cases of the coronavirus.

They claimed that a patient died at the hospital in April but the case was never recorded by or to the Department of Health. They requested to be screened and tested.

In April a spate of strikes erupted across the province including Cecelia Makiwane in Mdantsane, Frontier in Komani and Grey in King Williams with nurses threatening a May 1st nationwide strike that was abandoned.

Government has since officially shutdown Grey hospital, declaring it unfit to deal with patients.